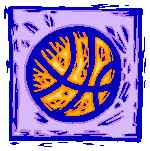 DAVY CROCKETT ELEMENTARY – Tommy Johnson has sometimes struggled this season while learning to play the game of basketball, but it sure didn’t look that way on Saturday.

Johnson scored a record-setting 4 points as his team, the Super Awesome Pokemon Red Raiders (aka the Red Team), possibly defeated the Super Cool Jedi Fighting Warriors (aka the Yellow team). “I know we’re not supposed to keep score,” said Tommy’s mother Laurie. “But I’m pretty sure we kicked their little asses. Oh, can I say ‘asses’? Maybe I should just say ‘booties’? Whatever it is, I just want to say that the Yellow Team can suck it! Boo-yah!”

A boisterous crowd of 30, mostly parents and younger siblings, packed the gym/cafeteria and watched as Johnson, a 4 foot-high 7 year-old, nearly doubled the team’s shooting percentage. The 2 baskets he made, out of 101 attempts, showed a record improvement in actually getting the ball within 10 feet of the hoop.

“I think the first shot he made bounced off my head and then went right into the basket,” said Red Team power forward Danny Smithson. “He’s such a lucky duck!”

Tommy has also excelled this season at what his coach Mark Wilson calls “the loose ball scramble”. “He’s always the first player to start the dogpile,” said Wilson. “Whenever the ball’s up for grabs, he’ll fight like hell for it. Even against one of his own teammates. Now that’s hustle, man.”

Coach Wilson then went on to talk about the Red Team’s overall improvement. “Once they stopped picking up the basketball and running down the court with it,” Wilson reported, “I knew the next steps would be to work on dribbling the ball on the floor, not on their own feet and to hopefully stop giving each other wedgies during practice.”

There were two major turning points in Saturday’s game that led to the Red Team’s triumph. The first came when the Yellow Team’s star player, Ethan Reed, got a fast break and dribbled the ball into the hallway so he could get a drink and go to the Boy’s restroom. “I had to go number two,” said Reed. “I really couldn’t hold it any longer and if I had an accident, my mommy would have been really mad. Now just leave me alone, OK? I’M NOT A BABY!”

The second turning point came when the Yellow Team’s point guard, Liam McPhail, skipped off the court to go sit in his daddy’s lap, thereby giving the Red Team a huge advantage and allowing Tommy to score his second basket of the game.

The Red Team’s next match-up will be against the formidable Superhero Hulk Monster Trucks (aka the Green Team) next Saturday after the Boy Scout’s Bike Rodeo. “I hear the Greenies have a husky 8 year-old on the team,” said Coach Wilson. “But I’m not worried. If my guys remember to dribble the ball with their eyes open and go potty before the game, we’ll be just fine.”

Or, as future junior college basketball star Tommy Johnson put it, “Yeah, whatever. As long as we get pretzels and juiceboxes after the game, I don’t really care what happens. Can I go now?”

Best of luck, Red Team. You’re going to need it.

<!--Wendi, edit profile here--!> Hi, I'm Wendi. I usually post here just once a week, and it’s a little unpredictable, so if you don’t want to miss any of the excitement, subscribe to my feed! <!--End Profile text --!>

Get updates in your inbox!